Reactors all leak all the time

“The amount of Rad in the air now Dooms Humanity to a relatively quick Extinction. Have a wonderful radioactive weekend and remember to Dodge the Rads, it’s dangerous out there.” Bob Nichols

Did you read everything Bob Nichols wrote about Fukushima since 2011?

“…It’s been about 73 years now and no person or nation has convinced the US government to change the nuclear policy….”   Bob Nichols

More on Fukushima Since March 2011

Go read it all again…. you may have missed something.  The first video may remind you of what you may have your forgotten.

Share it in your groups.  FB doesn’t like Lucy Occupy sharing in groups anymore, unless they are her groups, or ones she is an Admin.

The censorship is so out of control, so sign up for all the blogs to stay informed.  READ ON.  Everybody must do their shares!  – Lucy

Nichols on Nuclear – Fukushima and More

Are you in a city that gets a Million Counts of Radiation a Week? First, how on earth are you going to find out? Folks, that is a secret, isn’t it?

This is a Bad situation for all exposed to the Rad. Now included, for the 7th Week of 2018 just passed, all cities above 7,000,000 CPM Year to Date of deadly Gamma Radiation and its unpublished radioactive kin. A Count is One Radioactive Decay.

Gamma and Beta CPM by City and State in the US 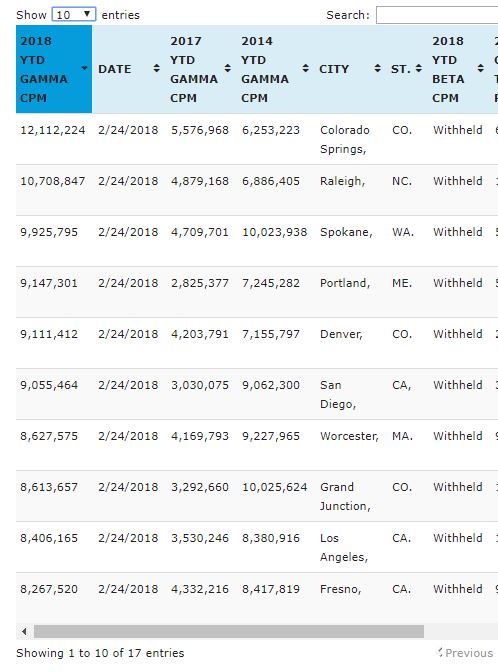 See the original article for access to the sortable Table of Poisoned American Cities in the Bob Nichols Veterans Today column.

Target Population Column Added. A Column displaying the latest Official Census in 2010 in the surrounding area to the nuclear site is shown. It is the Standard Metropolitan Area Census Report.

All of the Target Population are subject to random murder and/or illness from the daily radioactive emissions of the nuclear plant or weapons site.

The US Government thinks that nuclear weapons and the huge supportive nuclear industry are required for the national defense. So there you have the problem set. I disagree.

It’s been about 73 years now and no person or nation has convinced the US government to change the nuclear policy. Since the reactors leak Rads every day, and have since their construction; the nation is long past saving. There is nothing that can be done now.. 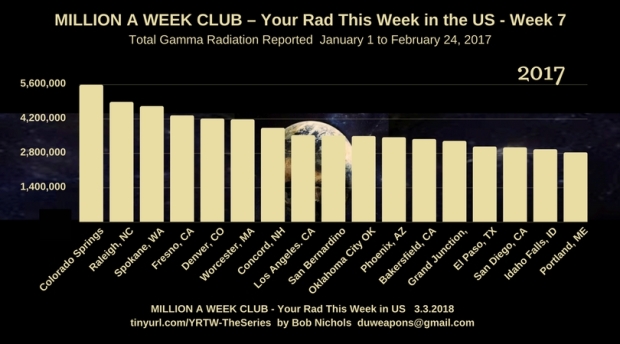 SEE MORE CHARTS, MAPS AND GRAPHS ON THE VIDEO CHANNEL – Your Radiation This Week – MILLION A WEEK CLUB

We Are The Media Now — Shared per copyright permissions as a public service message.  Lucy Occupy and Friends say Thank you, Bob Nichols and Million A Week Club – Your Rad This Week in the US!